A Brief History of the Davis® Dyslexia Correction Method 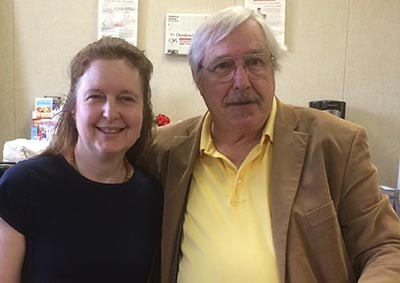 ​The Davis® dyslexia correction approach was created by Ronald Davis and educational psychologist Dr. Fatima Ali over 35 years ago. Ronald Davis was inspired to share his method with other dyslexic individuals after overcoming his own personal challenges. This unique method differs from other dyslexia interventions specifically because Ronald himself is dyslexic. Ronald struggled with extreme dyslexia growing up, and only managed to learn to read as an adult. Over time Ronald was able to earn a degree in engineering, and worked as both a sculptor and an engineer.

At the age of 38, Ronald had a "Eureka" moment upon realizing that when he was at his artistic best , he was at his dyslexic worst. When deeply absorbed in the creative process, his challenges in the realm of reading and writing were amplified. This is the crucial discovery that led to the development of the Davis method for dyslexia correction.

Ron began carefully observing variations in his own mental perceptions while engaged in various activities. He recognized that he was able to move his "Mind's Eye" to different locations, either within his mind, or outside of his own body, with dramatic results. This ability turns out to come naturally to most dyslexic individuals. Moving the Mind's Eye to different locations, a dyslexic thinker gains crucial information about objects in the three dimensional world. Some dyslexic individuals describe this skill as moving the Mind's Eye around like a camera on a drone. Ron calls this ability the "perceptual talent."

This perceptual talent lies at the heart of dyslexics' superior skills in art, music, engineering, and a whole host of other realms. However, this same natural talent, which dyslexic individuals tend to rely on unconsciously, causes serious problems when symbols are encountered--letters, punctuation, numerals, math signs--visual representations without 3D properties. In fact, the perceptual talent is the root cause of dyslexics' learning struggles. This natural subconscious investigative approach moves letters and other symbols around, adding layers of confusion to the dyslexic's attempts to make sense of what is being explored.

Ronald Davis discovered that by locating and then holding his Mind's Eye in a spot above and behind his head, he could establish an optimal state of orientation for himself. In this oriented state, the distorted perceptions of time, balance, vision and hearing he experienced when operating in the creative (or dyslexic) state were eliminated. He spent a long time exploring this conundrum for himself. He began talking with other self-identified dyslexics, and learned that their experiences were similar.

Inspired by the discovery that he could eliminate his perceptual distortions and actually enjoy reading, Ron set out to develop a step-by-step approach to teach this skill to others. He joined forces with Dr. Ali, and together they created the Reading Research Council in Burlingame, CA.

Ron's original methods have been improved through the participation of hundreds of dyslexic individuals in the intervening years. The work of the Reading Research Council led to the formation in 1995 of Davis Dyslexia Association International. At that point Davis correction programs became available to clients, guided by certified Davis facilitators.

The Davis approach is predicated on the belief that dyslexia is primarily a gift, not a disability. Traditional teaching methods, relying heavily on "pencil and paper" presentation of concepts, create learning struggles for individuals who are primarily visuospatial and kinesthetic learners. When information is presented in ways that match how dyslexic people think, they learn smoothly and naturally.

The Davis methods were designed by Ronald Davis, who understands the processes of the dyslexic brain. Davis clients create models for their own learning with the guidance of trained facilitators. Through hands-on activities, using clay, clients explore, modify and master their learning. The creative process is essential to successful learning for dyslexic thinkers.

"The creative process and the learning process, if not identical, are so closely related that they are inseparable. For the dyslexic, creativity is an essential part of the learning process. Mastery requires creativity."
"When someone masters something, it becomes a part of that person. It becomes part of the individual's thought and creative process. It adds the quality of its essence to all subsequent thought and creativity of the individual." ~Ronald Davis